On Sri Lanka we heard about an incredible Indonesian surfer from a fellow traveller. Rumors said he was a priest and connected with god threw the sea.. Also he was probably Indonesia’s best surfer. He described him surfing and getting speed faster than anyone else and when in the tube he stood in a praying position. Like he was praying to the sea..

We had been on Bali before and knew it is an island of gods so we didn’t doubt there was a guy like this, we just hoped to see him some day..

Our second day on Bali we celebrated Nyepi with the locals in the village of Pecatu, we got invited to a local family’s house and their neighbourhood turned out to win the Nyepi festival. They showed us an enormous generosity and we had a great evening.

It wasn’t until later, after reading an old copy of Indo surf & lingo, we saw the a photo of a surfer standing in one of the fastest tubes in indonesia, in ”praying stance”. And the guy on the shot was the generous family member who invited us to his home on Nyepi.

We started to hang out and he was so inspiring we decided to share some of his life with you guys. To actually make a sunshine story, here you go.

His name is Mega Semadhi. He is born and raised in Pecatu which lies in the heart of Bali´s famous peninsula ”the bukit”. Uluwatu, Padang Padang, Bingin, Balangan, Nusa Dua, Greenball, Impossibles, Nyang Nyang they are all his home breaks. With a 6’10 board he got from a friend he caught his first white water on the inside of Bingin. At that time Mega was ten years old, later the same year he surfed the outside of Bingin and next year, 11 years old, he ”stood up in his first competition”.

He has been sponsored by Rip curl for 8 years and are now sponsored by Rusty, Electric, MacBeth and Vestal. He competes in the ISC (Indonesian Surf Championship) and the ASC (Asian Surf Championship). This february he got home from a two month stay in Hawaii. Over there he has been surfing pipeline and Woow!! why not scroll down and take a sneak peak at the pipe-pictures right now, wooha they are amazing!!

But Mega still claims that his favourite waves in the world are the ones he got at home, where he’s close to family and surf with his friends. When we ask him when his best session ever were he answers that every time he surf he has his best session. That pretty much describes Megas view of life. His dreams are to always be able to surf, be good to people, and to enjoy life. His positivity really rub off on you and a more humble surfer than Mega you just won´t find.

For him being a pro means nothing, to surf is his life. He surfs to be close to nature, to be close to God. Mega got priest blood in his veins, he is chosen to become one and should be studying as we speak. But he got permission by his family to surf in this part of his life and is meant to become a priest in a later phase. Having this in his mind while in the water as a pro surfer is what makes that perfect connection between him and the ocean.
If you want to hear the details you will have to come to Bali and ask him yourself. I´m sure he will sit down and have a chat with you, share some glow of life and if your´re a surfer, definitely share some of his waves with you.

Maybe we have just been poisoned by all the visa application, arrival and departure cards or something but we have let him fill in one of our sunshine forms, and asked him about some life advise. To share Mega and some of his wisdom with you.

Thanks Mega for taking your time. Enjoy the waves of life until we are back again, 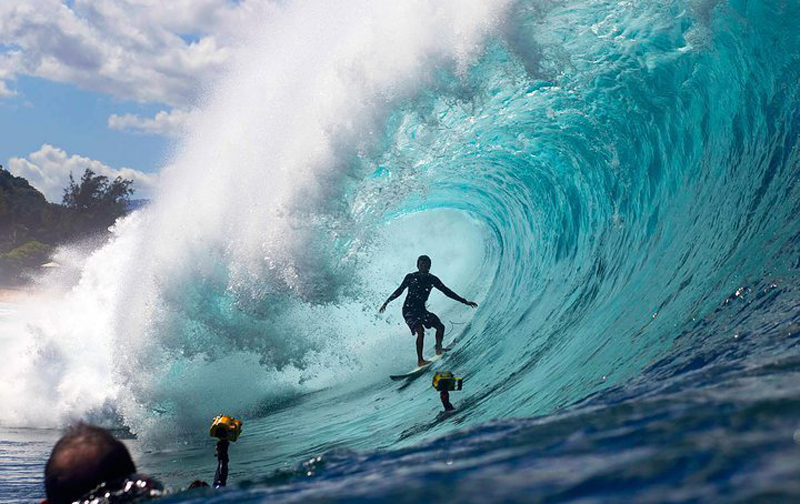 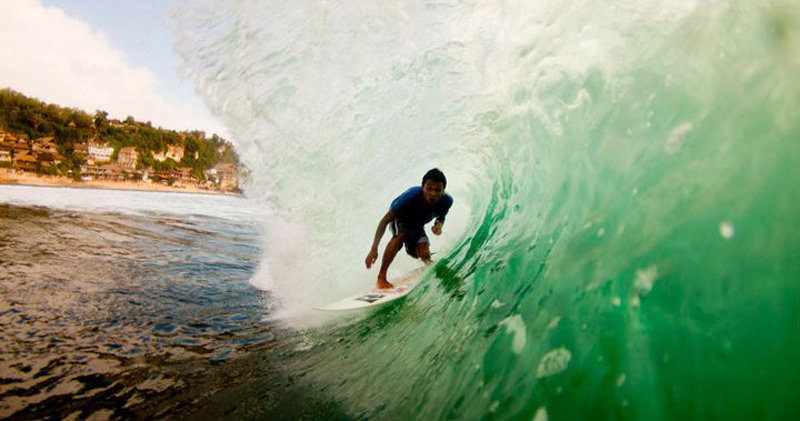 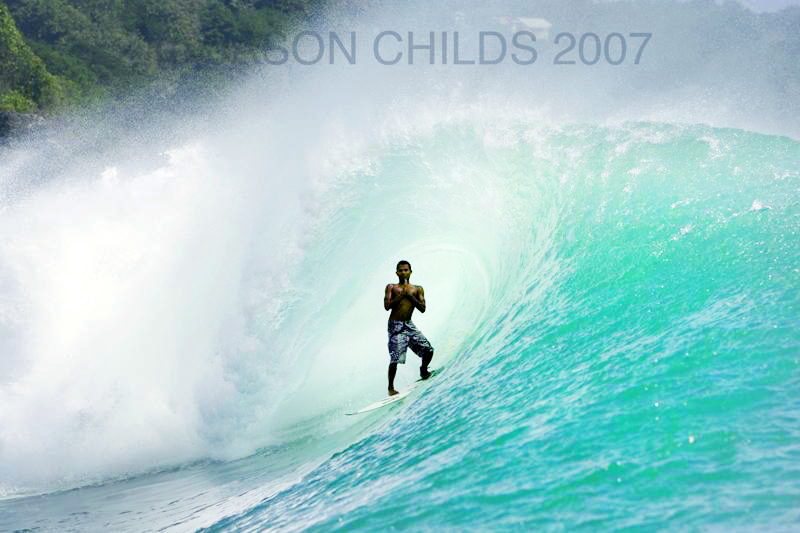 Photos from Megas “profile photos” on facebook. Thanks to all the great photographers! Especially to Jason Childs o let us use the last one, such a great shot and just the picture we had in our minds when we heard about the mysterious surfer flying in the waves of Indonesia.

Below are our shots from an afternoon at Megas house, taking a look at his new boards, his new bike and just playing around with his dogs. 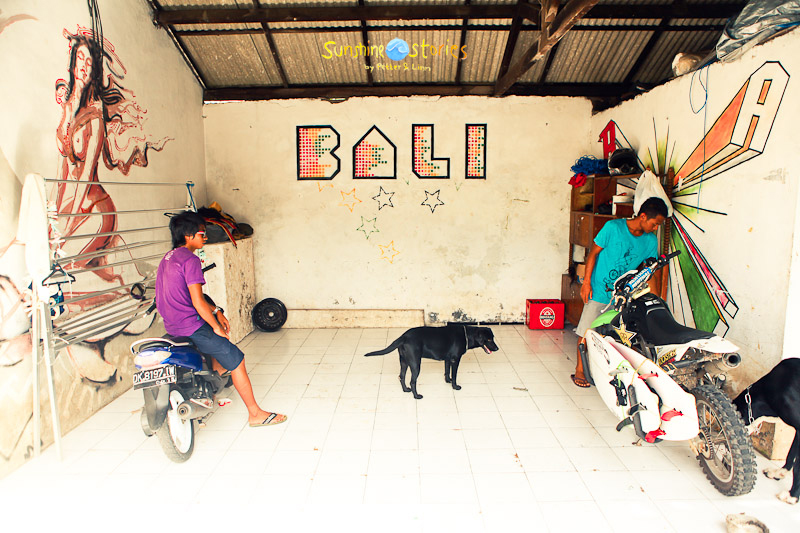 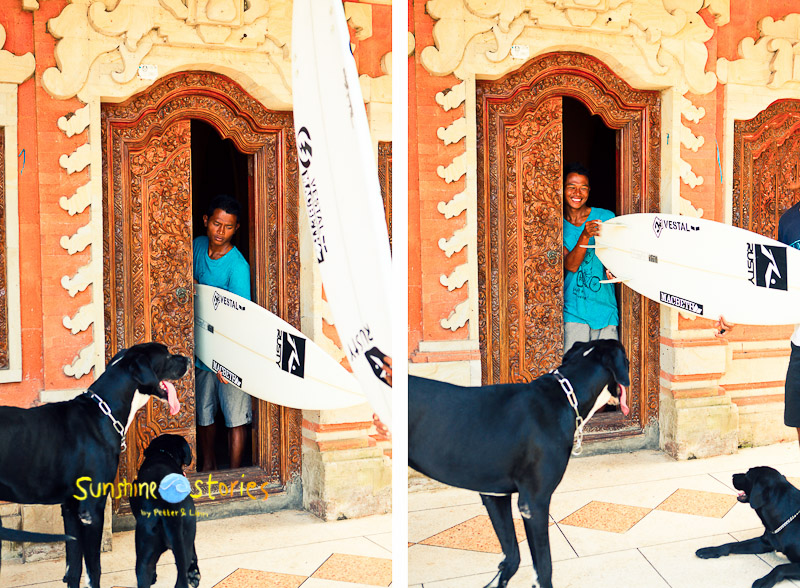 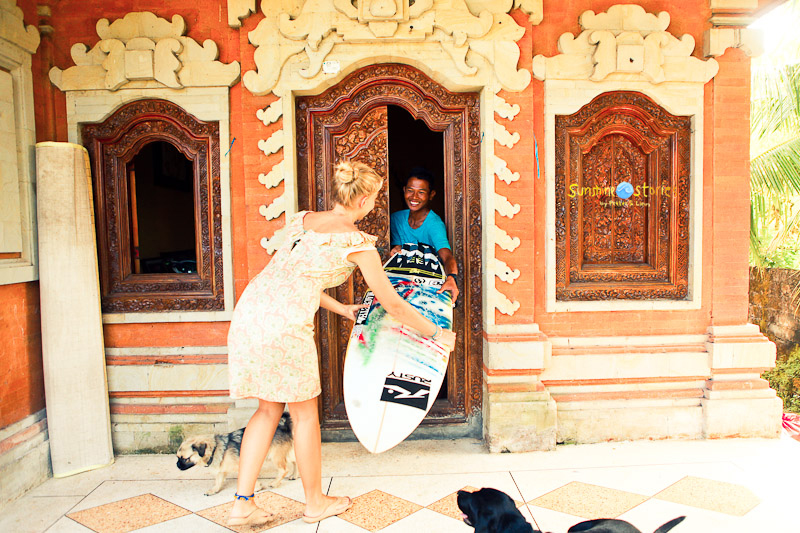 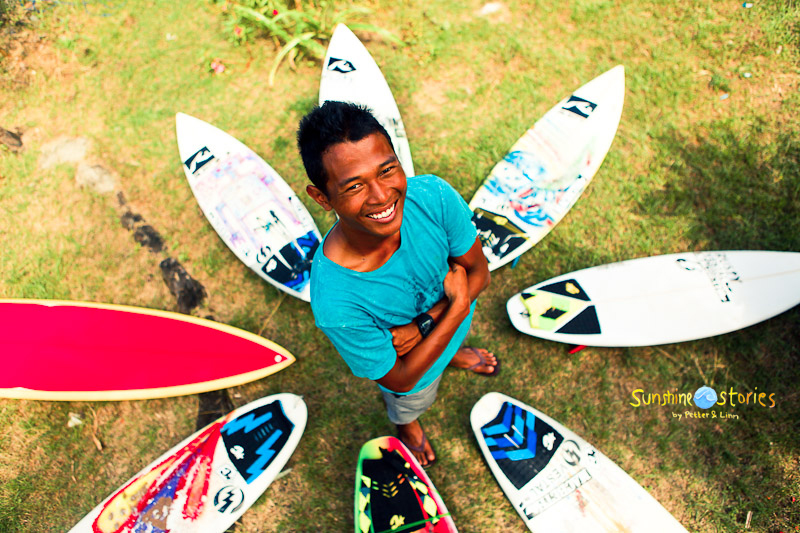 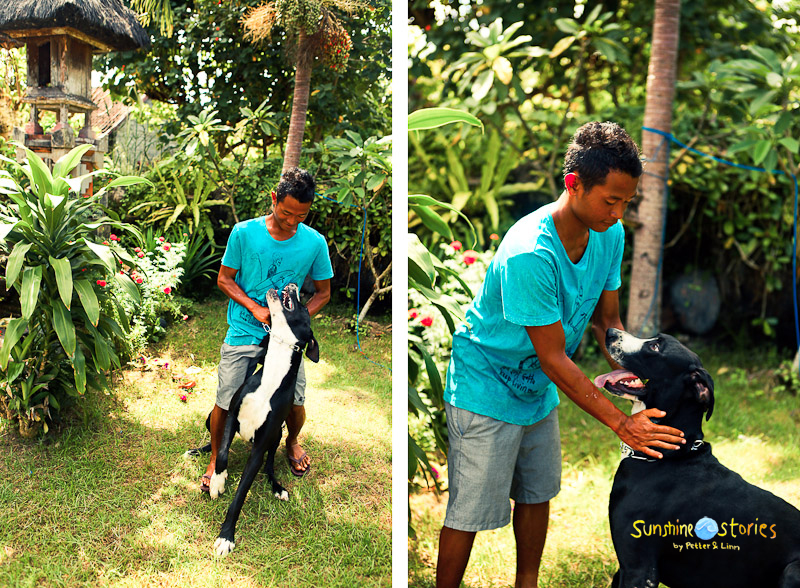 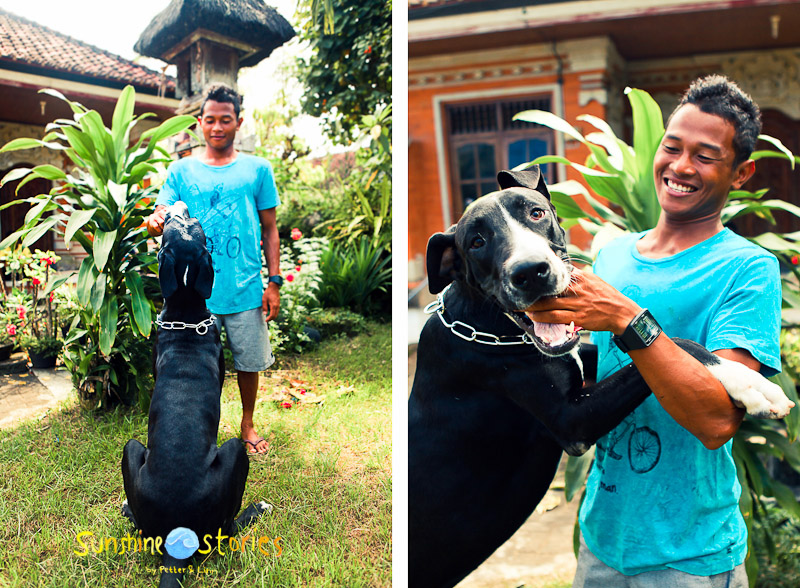 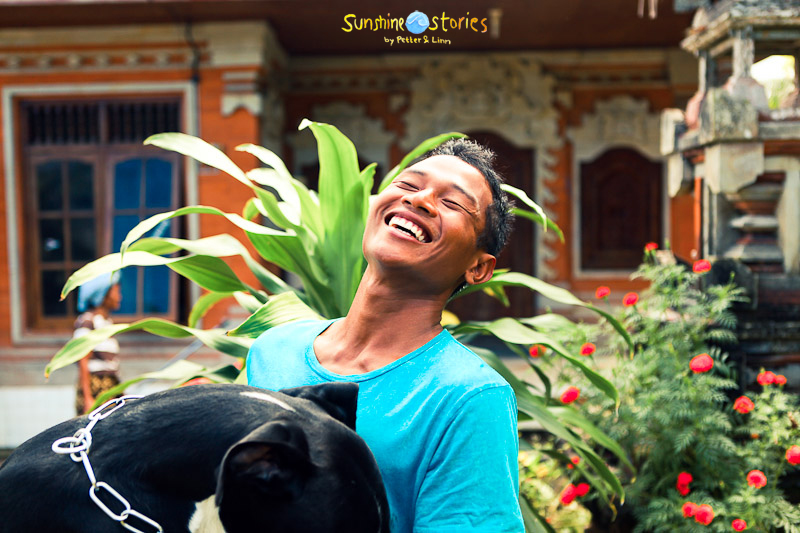 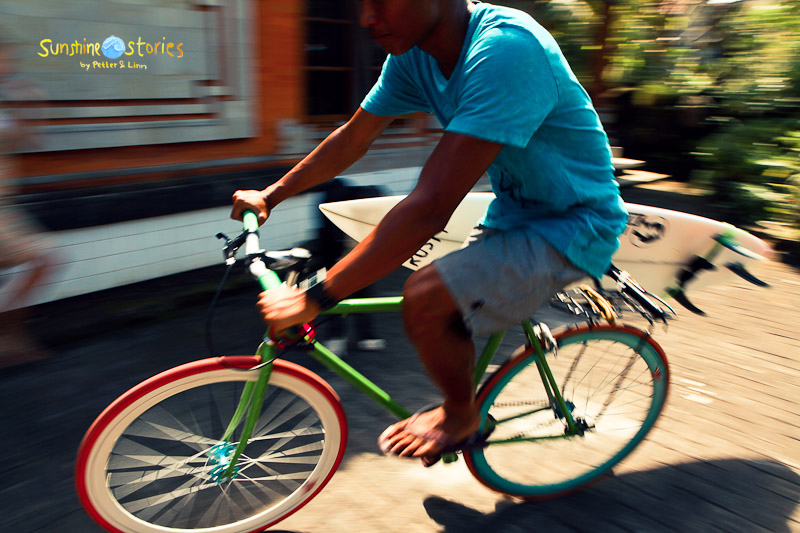 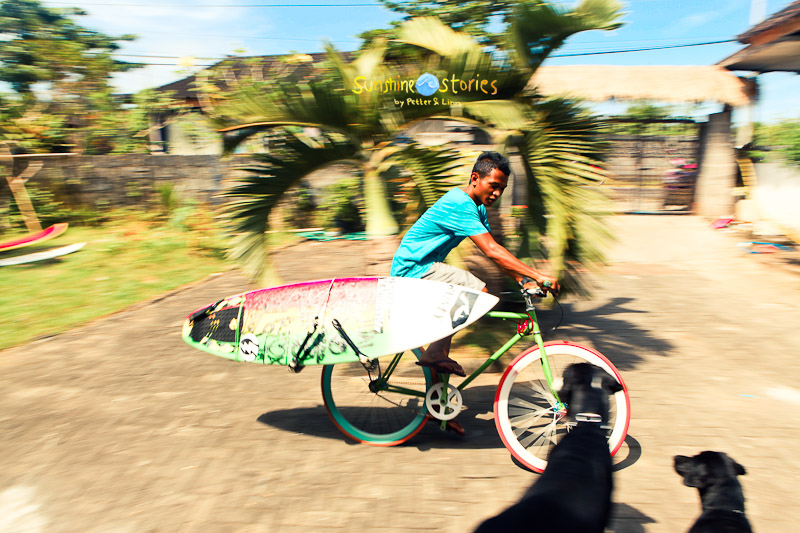 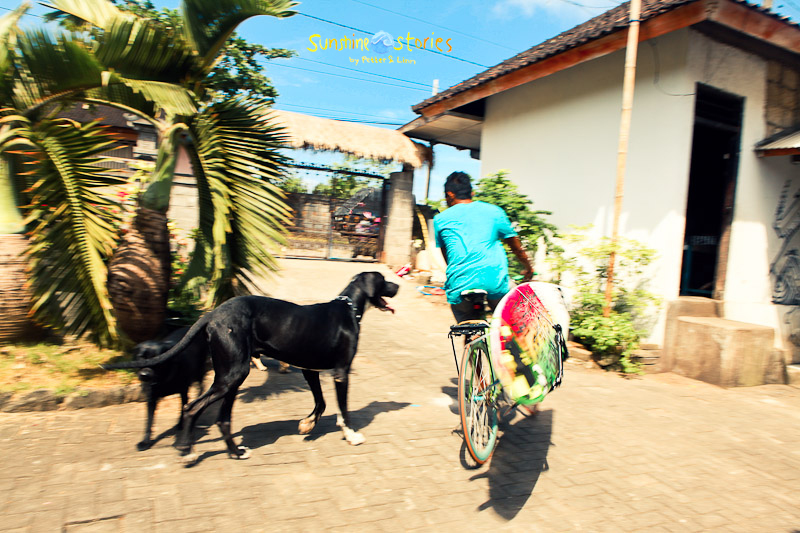 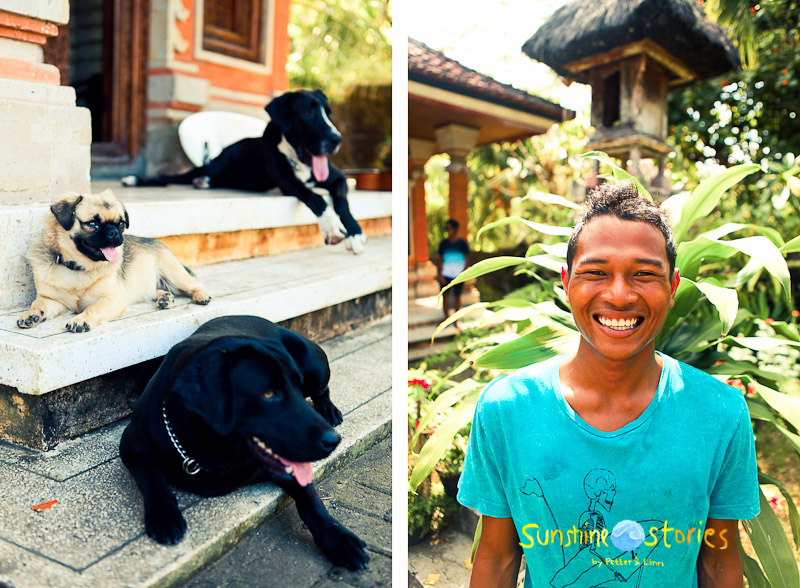 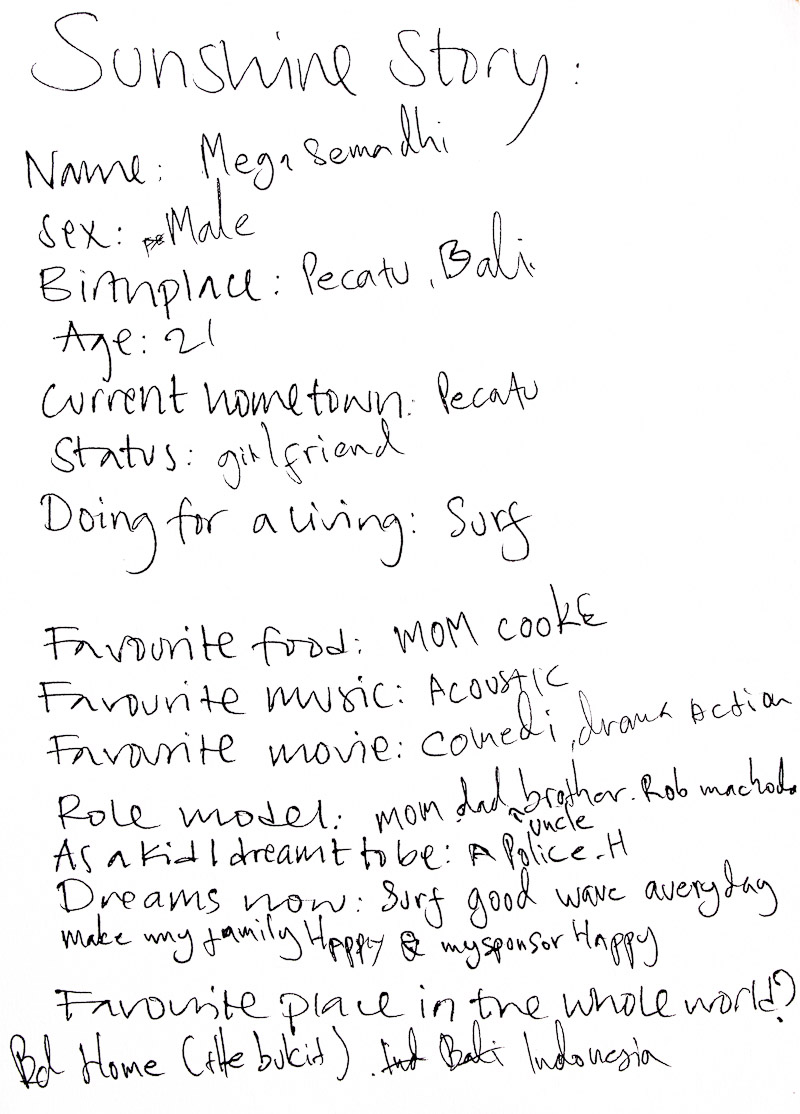 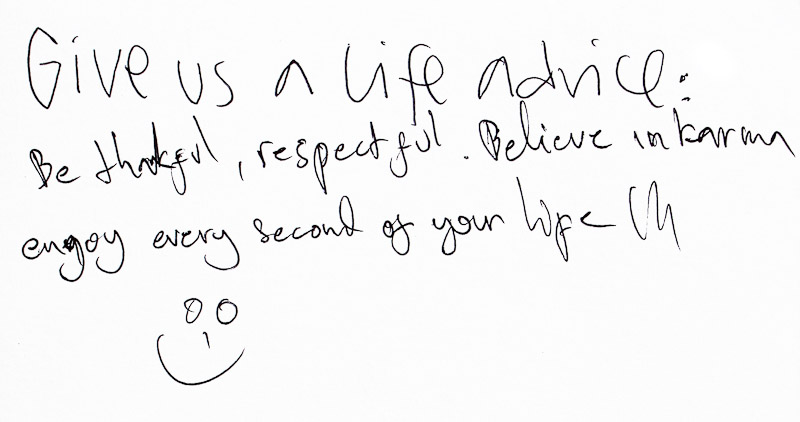 Please write if you enjoyed this post and want to hear about more people like Mega. We got the feeling that another trip is up pretty soon, and people like Mega we meet all the time. So we are thinking of making a few more stories like this one, please tell us what you think! Thanks!!