The bus to Nicaragua was gonna leave at 11:30, but didn’t show up until 17:15.. We spent the whole day at a gas station. Really! We got there at 10 since we wanted to be in good time and not miss the bus.. All in all seven hours in which e got us some new friends (and enemies) and did a excursion to a Burger King that was supposed to be a ten minutes walk away. Do I have to tell you it wasn’t ten minutes away? Ten minutes is different depending on what country you are in.. We learned that in El Salvador 10 minutes is about 40 minutes. Walking a long a big road in the country’s second largest city; San Miguel, in a not very nice part of the city isn’t the smartest thing we’ve done this far. People were harassing us, shouting, running after us, living next to the road, on the road, screaming from cars driving by and so on. We were definetly  on the wrong spot and just hoped to see the burger king sign show up asap, but it just never did. I really wished that I had put on longer pants too.

Finally we found it, yey. We had our hamburgers and thought that we should stay in the air conditioned fast food restaurant until an hour or so before the bus was gonna leave. But somehow the time must have gone so fast because when we looked at the clock it was already time to leave. So we started the hike back, and when we finally got back again we found out we’d looked at a clock that had stopped… So we still had a few hours of wait to do at the gas station.

During those hours I got two admirer, one of them is the man in checked green shirt here under. He wanted to give me a pair of earring and never stopped trowing kissed at me.. The safety guards pushed him out of the gas station like 20 times, but he kept coming back for me.. Petter had to sit in front of me so that i could hide behind him, then he run around from one side to the other to get a sight of my face.. The other admirer was pretty much a copy of this guy, he showed up a little later and after like 5 mins with both of them at the same spot the started to fight each other. Haha.

Finally the bus came and we were happy to jump up in the front seats were we could see the border crossing and the sketchy ride through Honduras.

Do I sound bitter? I shouldn’t.. It was really fun, now looking back at it. 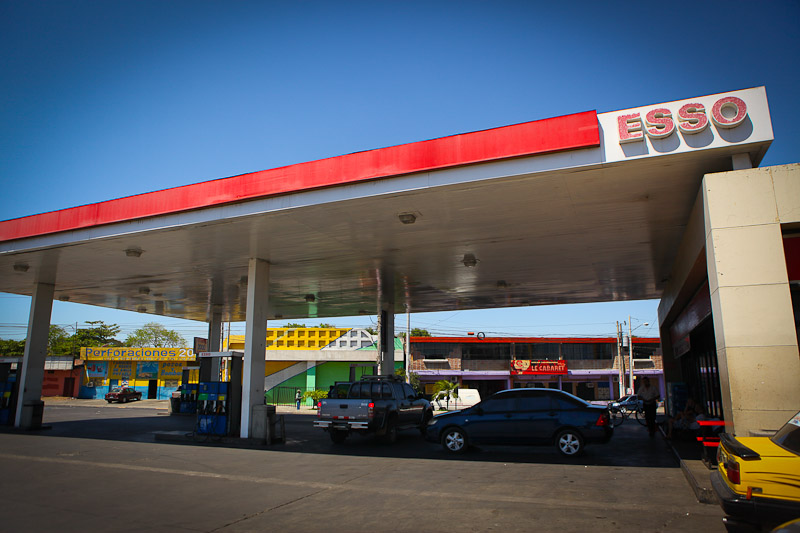 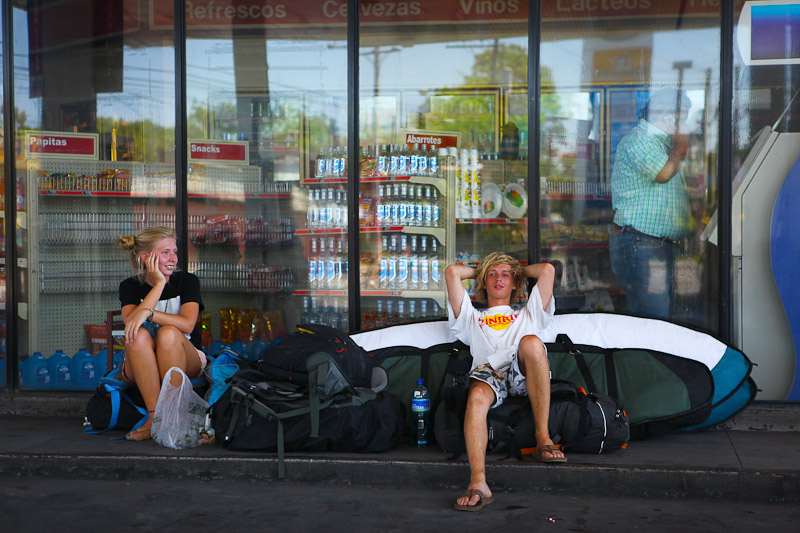 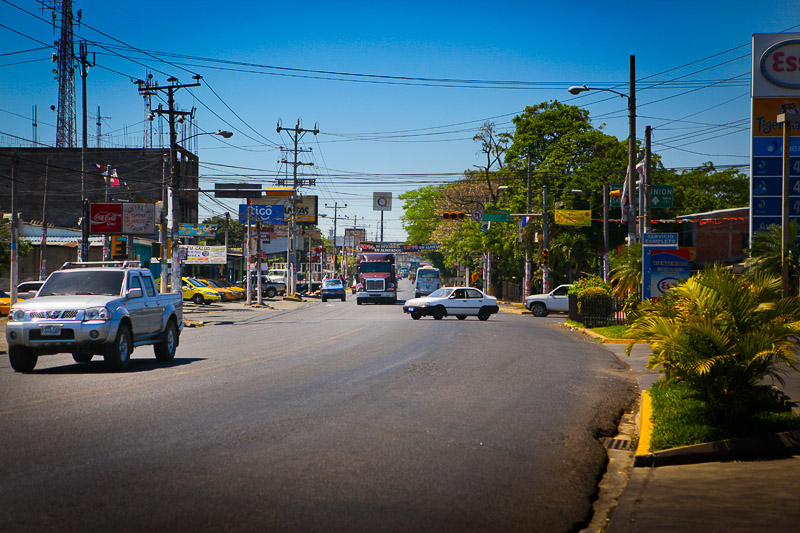 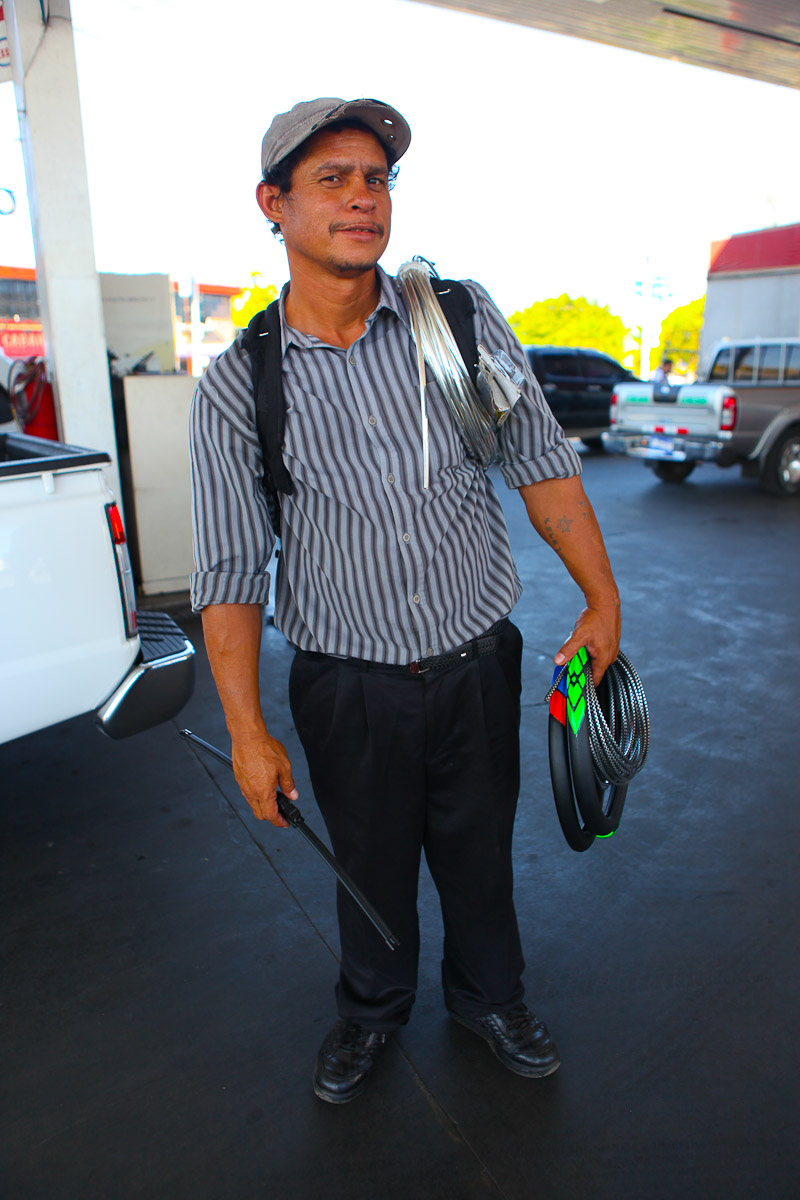 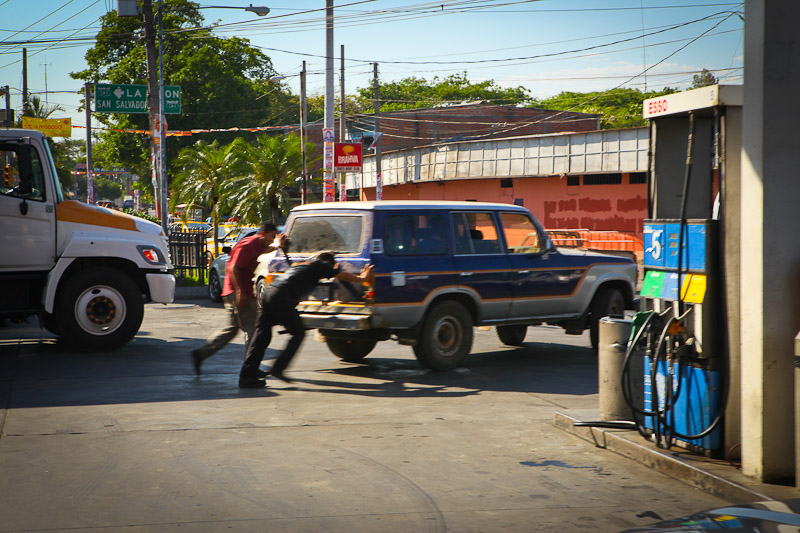 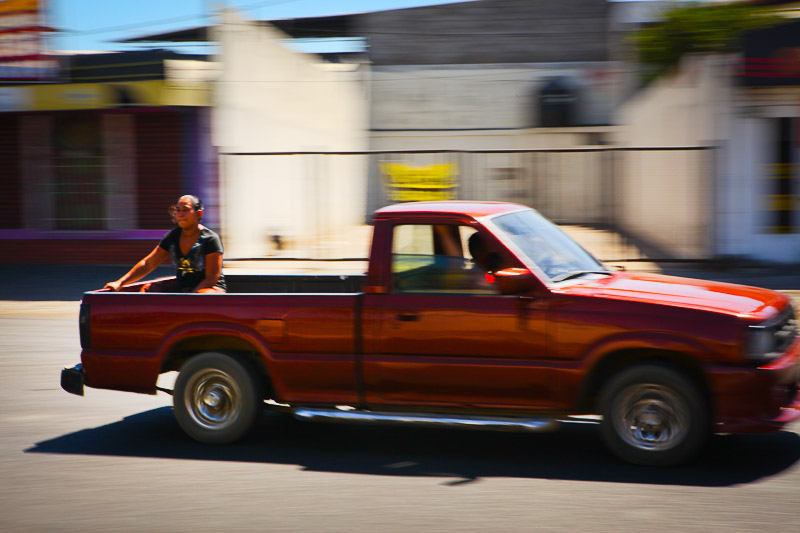 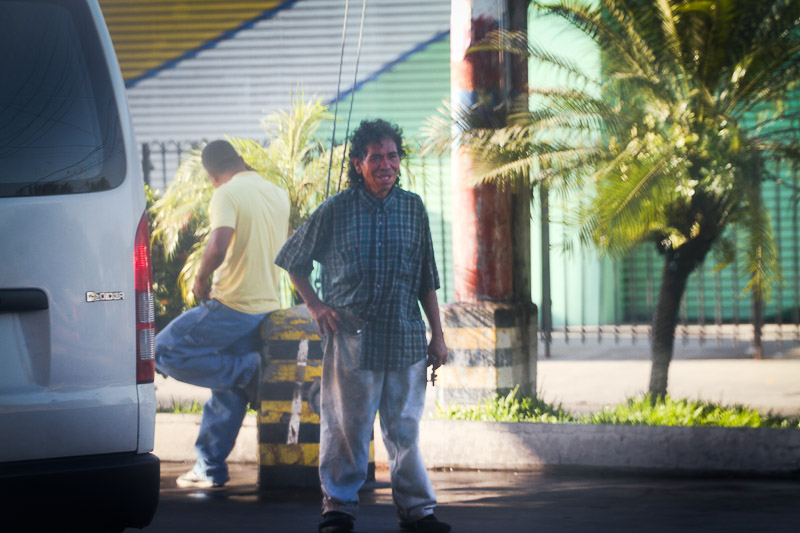 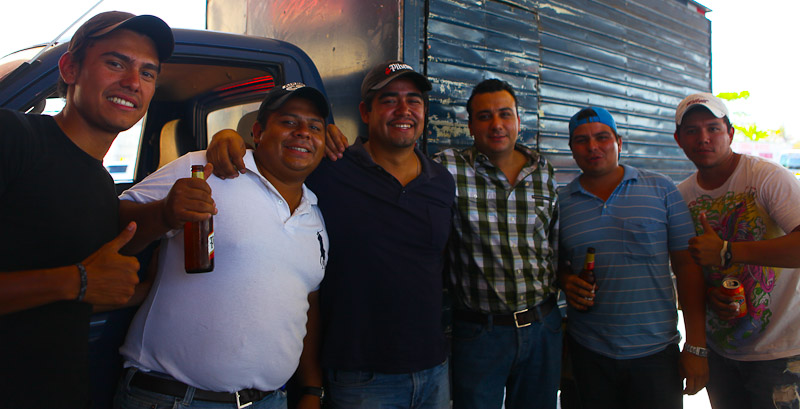 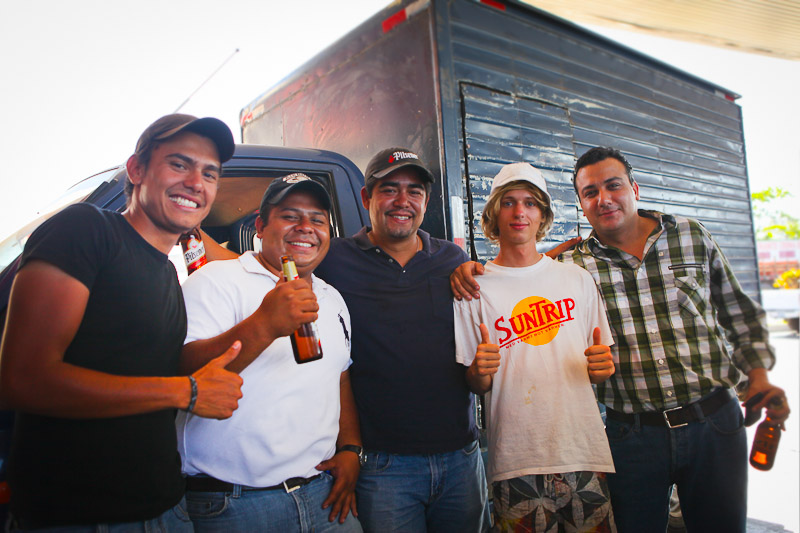 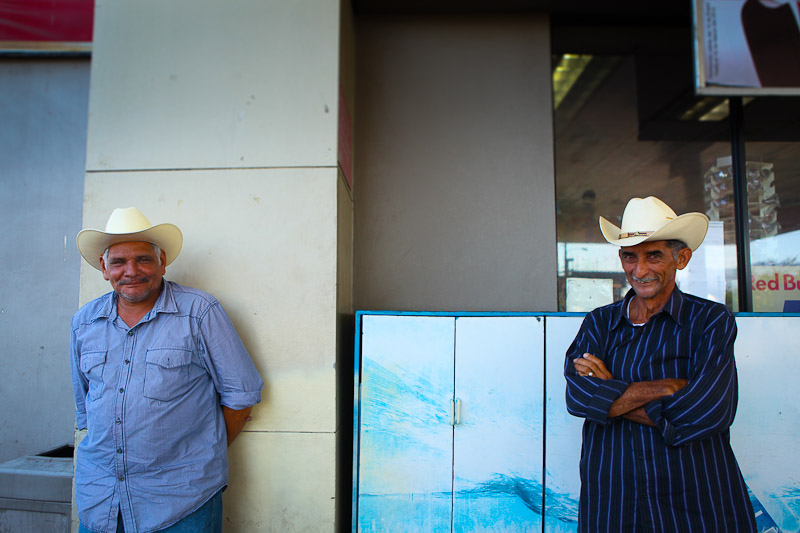 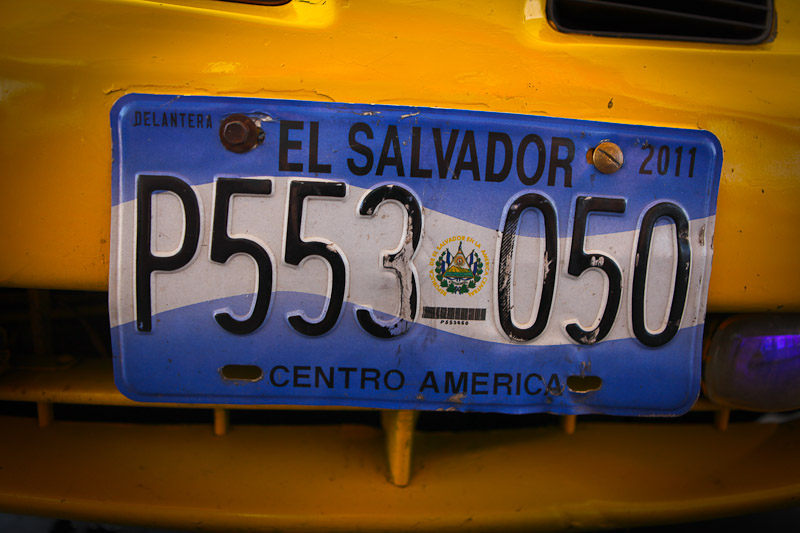 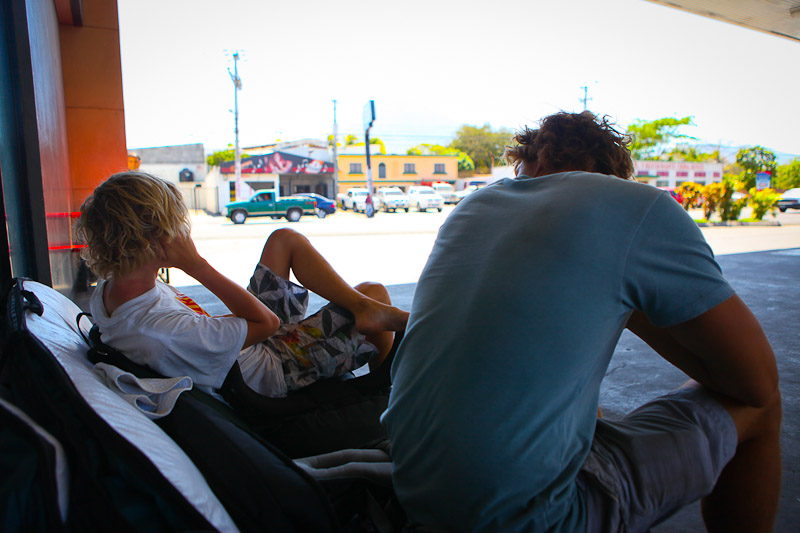 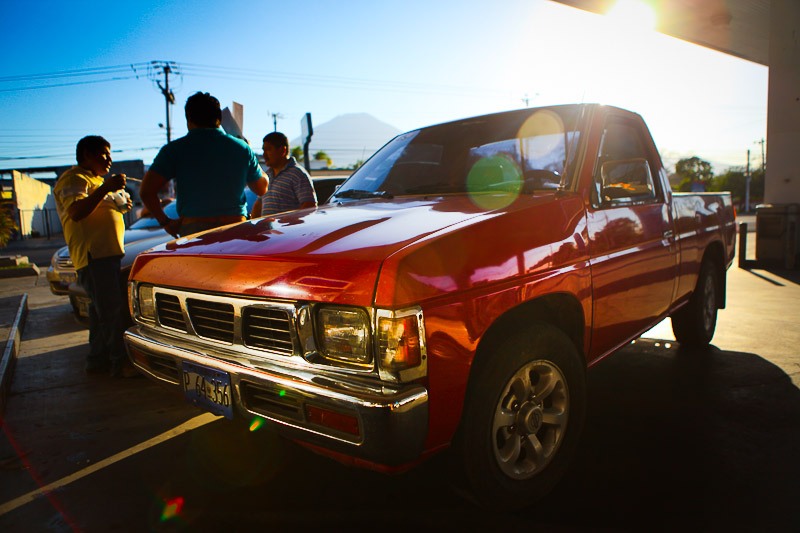 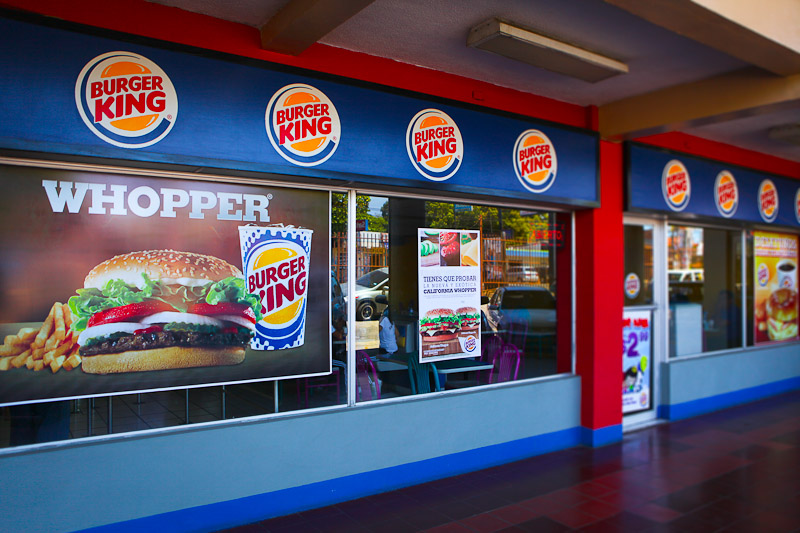 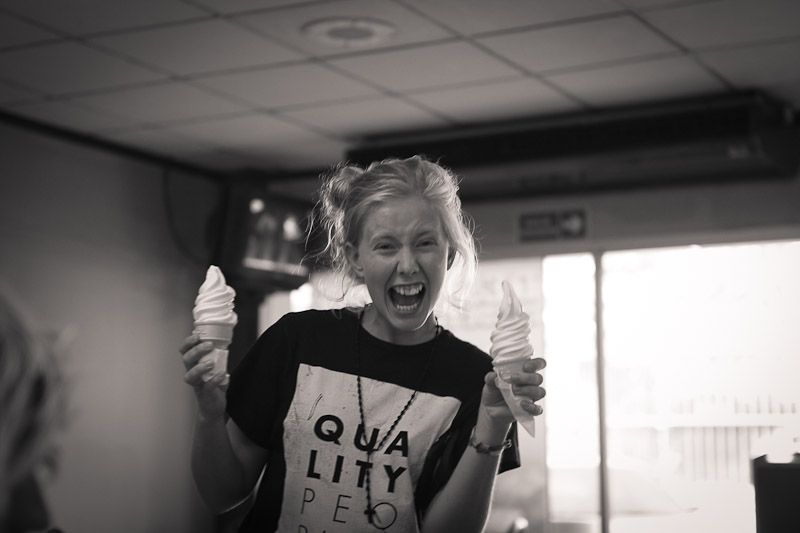 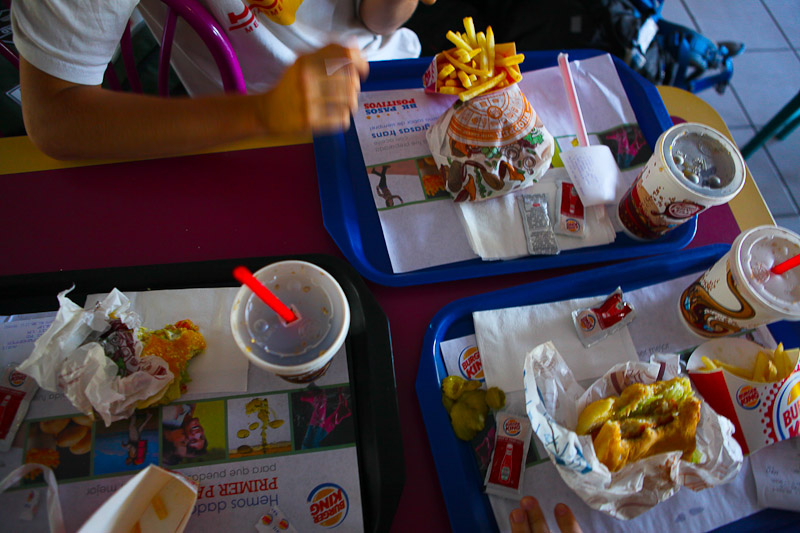 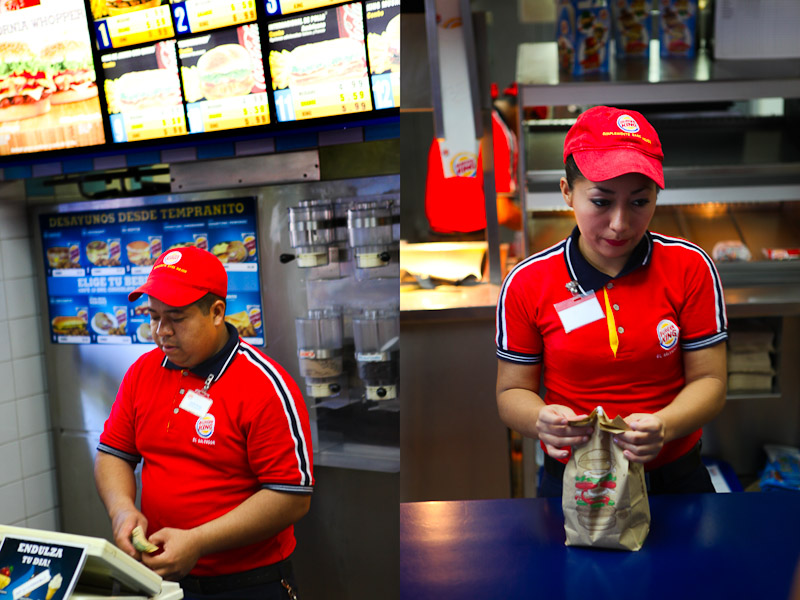 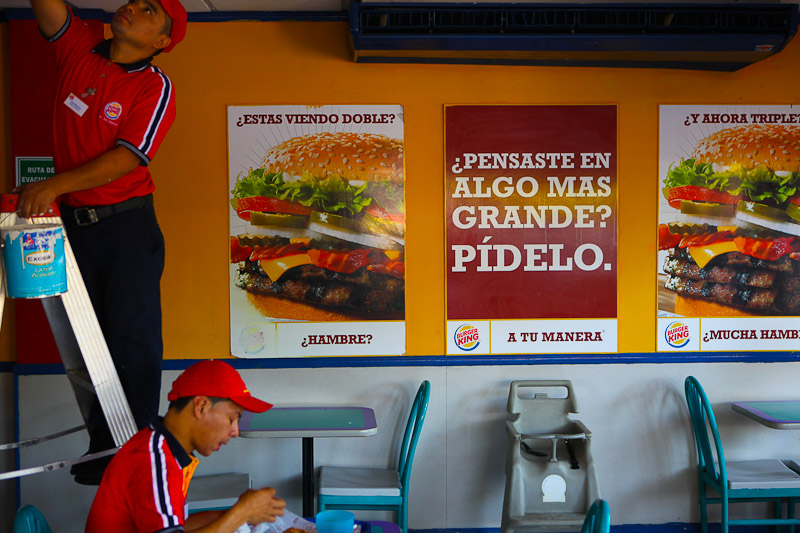 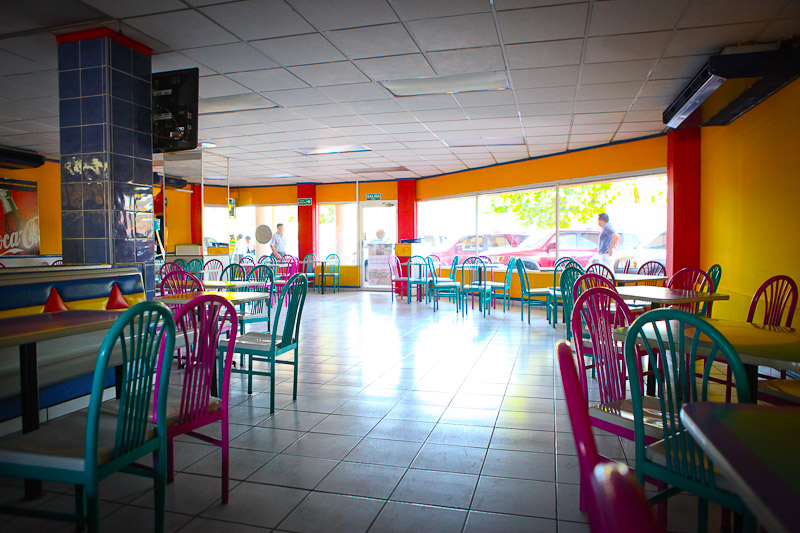 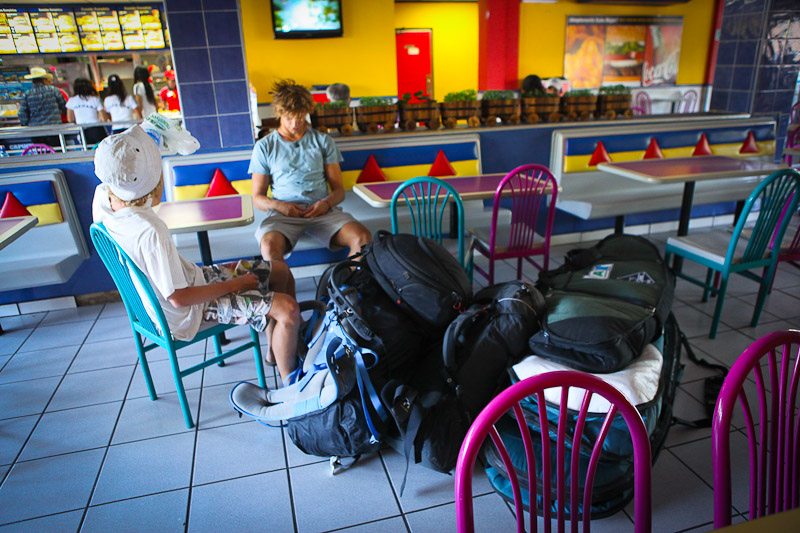 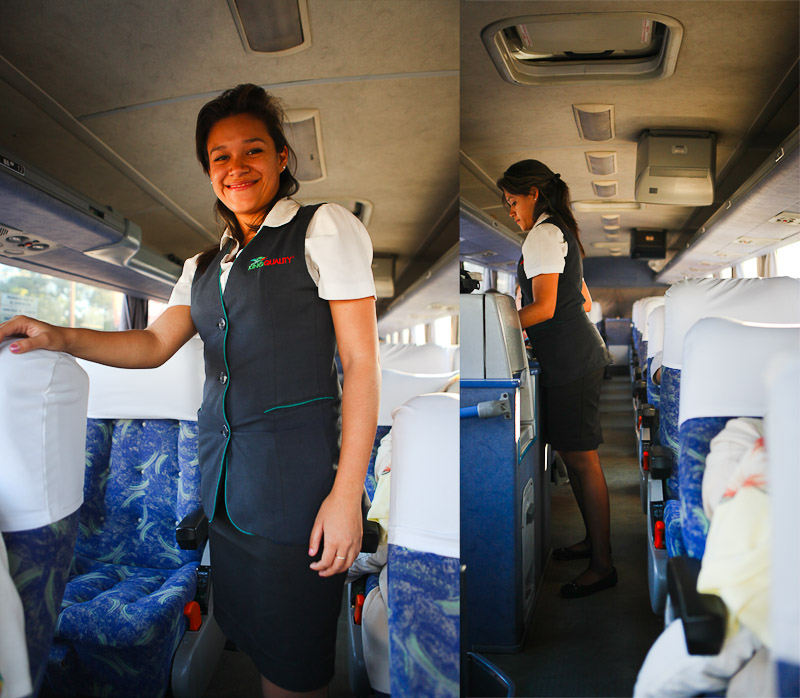 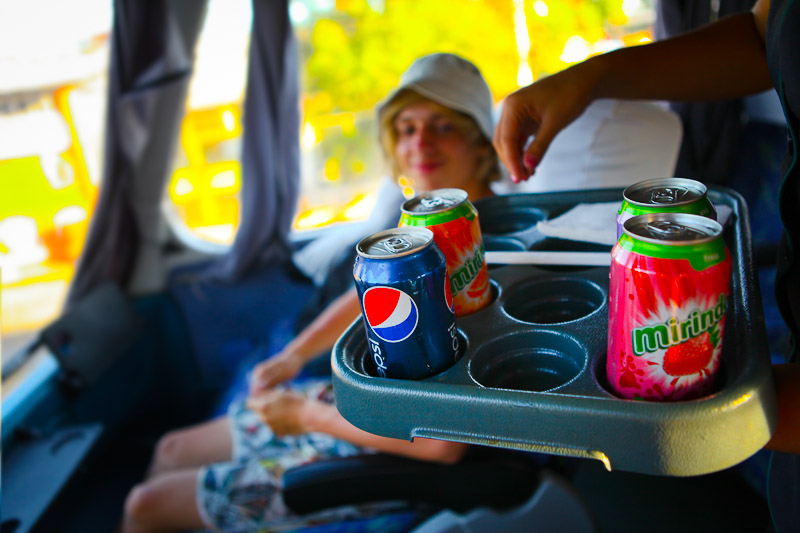 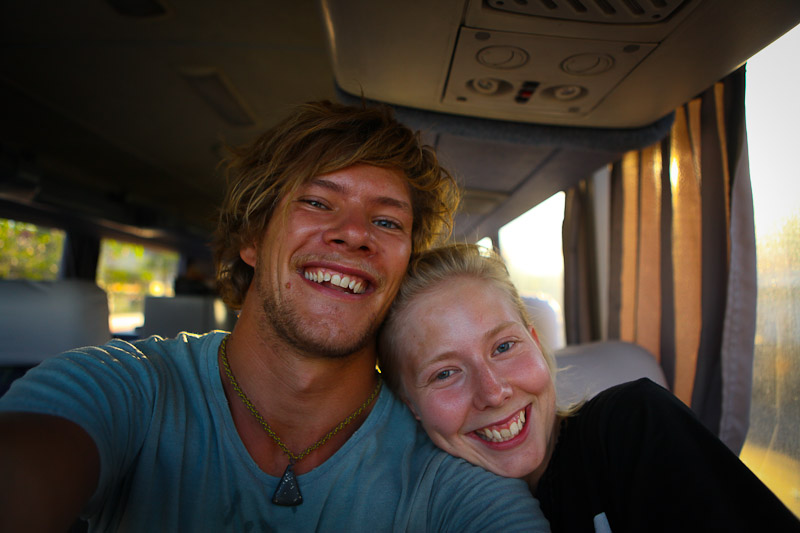 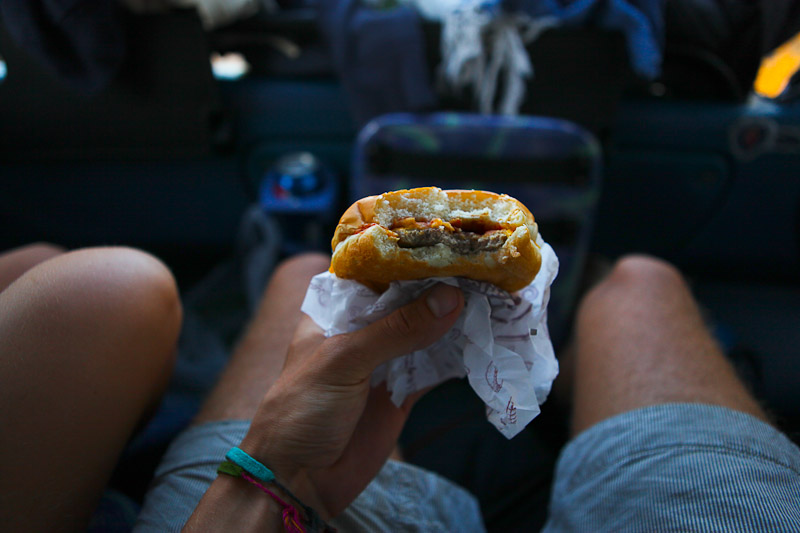 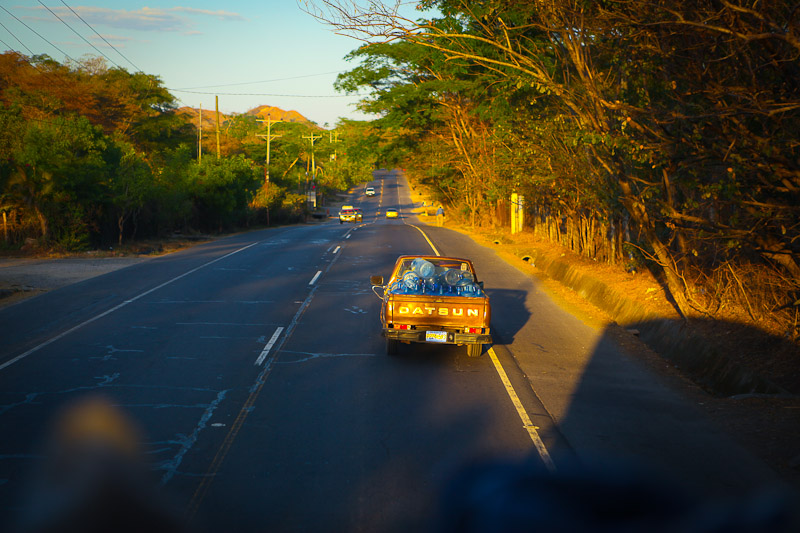 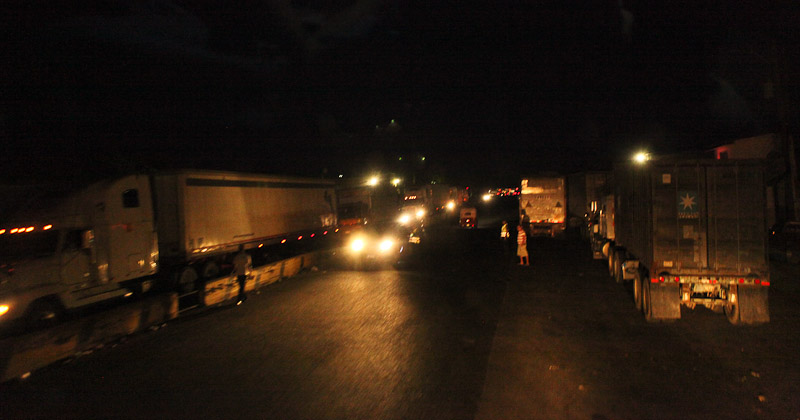 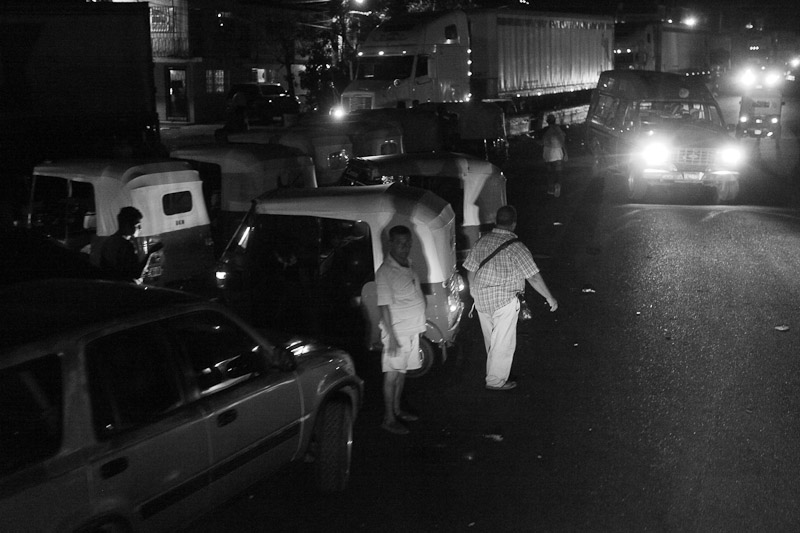 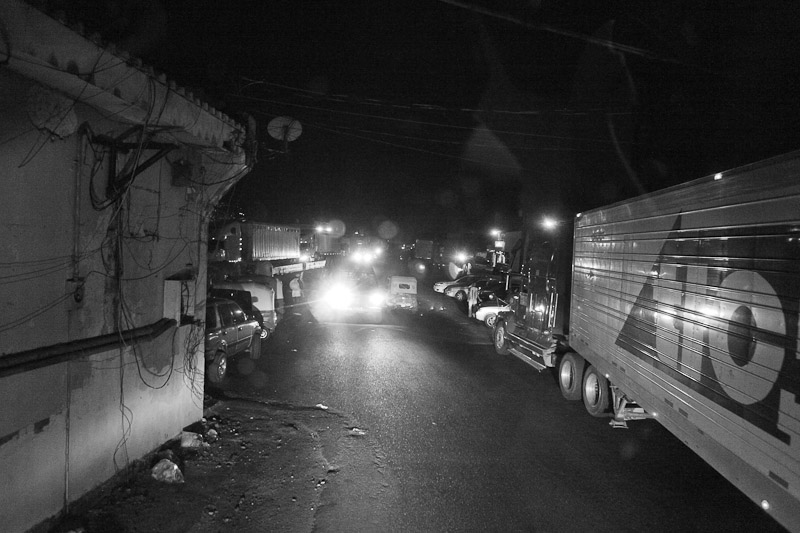 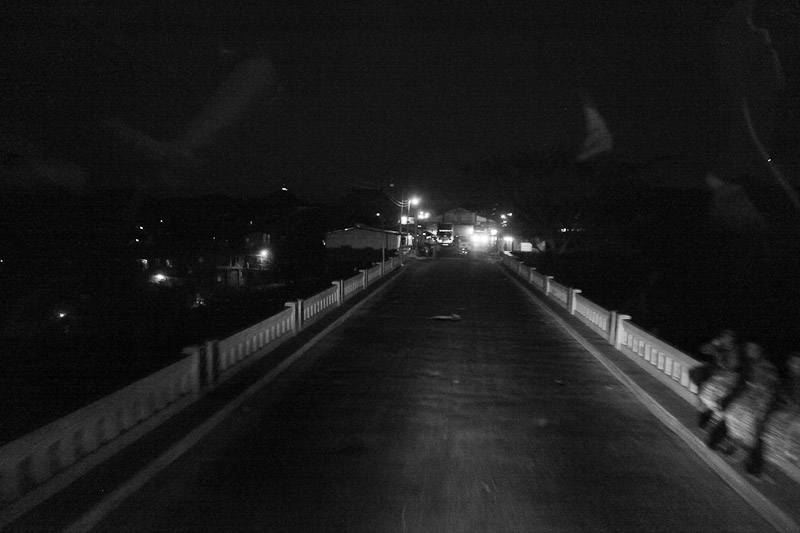 4 responses to “on the (wrong) streets of salvador”